Our history, our dream 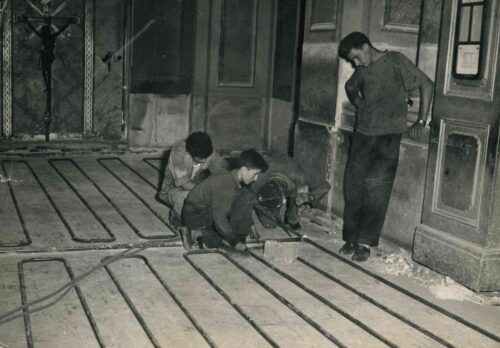 It all began on 1 July 1948, when Luciano Castellani, at the young age of 25, started his activity of thermo-hydraulic systems based in Via Cussignacco – Udine. In the post-war period, the plumber’s professional figure was not as we know it now, but there was the term “bandie” used locally to mean tinsmith, tin worker, etc. At the time the classic means of transport were not cars but the most common means such as bicycles and carts and the average age of the workforce was well under eighteen. 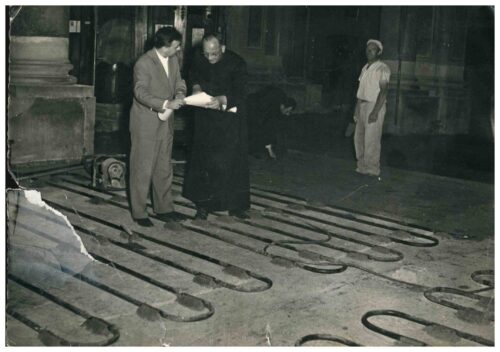 It is useless to point out what difficulties he had to face, but Luciano was stubborn in his work and he made the business grow out of what were his “country” boundaries by going well outside. The 60s were years of great turmoil and Luciano was able to grasp this change. In fact in 1969 he began to employ his skills also for the realization of public works, participating in tenders that took him in the 70s to Central Italy.

In 1971 Castellanimpianti expanded its business with a new office located in Udine in Marangoni Street.
The furrow was traced. His son Pier Giuseppe, who had grewn up in the family workshop since he was a child, joined the company in 1981 as a collaborator of the technical office. In the following years he expanded his personal path graduating in architecture.
A few years later, in 1990, there was a new turning point: from a sole proprietorship to a capital company with the full entry of his son as a shareholder. 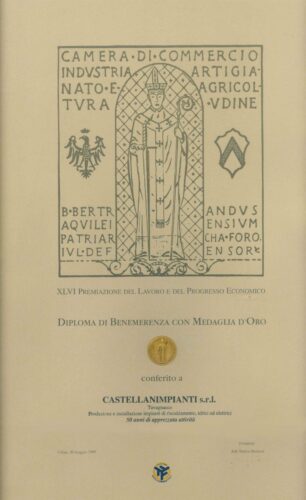 In 1991 Castellanimpianti expands its offer with the plant maintenance and management service, acquiring skills and certifications also relating to the electrical plant engineering part.
In 1994 the need for larger spaces forces the company to move to a more suited location with more than 3000 m2 and where it is still located in the municipality of Tavagnacco, a structure suitable for containing the means and staff that have gradually been acquired . In 1997 it obtained the first certification referred to the ISO9001 quality management system.

The 50 years of activity of Castellanimpianti were celebrated in 1998, with the award given by the Udine Chamber of Commerce to Luciano Castellani and his son Pier Giuseppe Castellani.
Under the guidance of his son Pier Giuseppe, it won the first of a list of foreign orders, including Algeria, Austria and France.
An important goal was reached in 2013 when Pier Giuseppe’s son joined the company; Filippo, only 18 years old, marks the entry into the company of the third generation of the Castellani. His young age brings a wave of enthusiasm, which combined with the industriousness transmitted by both his father and grandfather Luciano, allows Castellanimpianti to consolidate its future.

In 2018, the company turned 70; many of the objectives have been achieved, the Castellani family considers this milestone not as the end of a path, but as the beginning of a new phase.

In 2019 Castellanimpianti obtains a new recognition: the ISO 14001: 2015 environmental management certificate. Contextually Filippo becomes part of the company, carrying on increasingly important roles …… now the dream of his grandfather Luciano and his father Pier Giuseppe to pass on their experiences…. is realized.